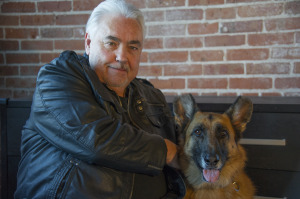 Our family dog, Neika. She’s the inspiration for the German Shepherd in the Dan Morgan thriller series.

Leo Maloney was born in Massachusetts, where he spent his childhood and graduated from high school and attended Northeastern University. In the mid 1960’s, while in the army, he was recruited to become a deep cover black ops contractor for a clandestine government agency.

While he was serving his country in the secretive world of Black Ops over 30 years, he operated several “cover” businesses including a classic car brokerage, promotions and limousine companies, and a detective agency. He served as a municipal police officer in Revere, Massachusetts.

After leaving his career in black ops, Leo continued several of his cover businesses, and also had the opportunity to try his hand at acting in independent films and TV commercials. Leo has 5 movies to his credit both as an actor and behind the camera as a producer, technical advisor, and assistant director.

In his most recent project, Leo began writing, reliving many of his Black Ops experiences and evolving them into his books. In 2011 he signed a contract with Kensington Publishing Corp for the Dan Morgan thriller series.