Home Uncategorized My Story: How I became a Published Author

My Story: How I became a Published Author 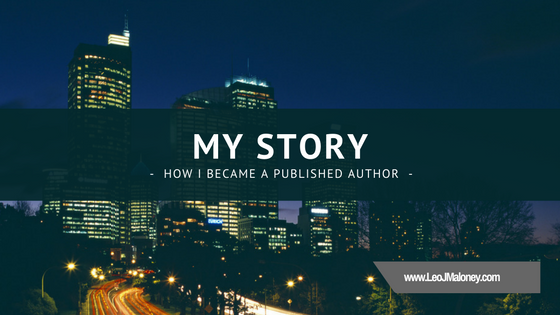 My name is Leo J. Maloney and I am an author with Kensington Publishing Corp. in New York, NY. I write action thrillers that are based on my experiences as an operative for a clandestine government agency. After retiring in 2001 from a 30-year career I told my family and several close friends what I had really done for a living. It was then that my wife began encouraging me to write a novel about some of my experiences. I had no formal training as a writer but found it came naturally to tell stories about events in my life.

In 2009 I decided to give it a try and began writing a novel that I called Termination Orders. It is fiction, but based on several personal experiences as a deep cover operative. After about 1-1/2 years the manuscript was completed and I decided to go to New York and attend a well-known writer’s convention called Thrillerfest to try and get an agent to sell my novel to a publisher. While at the event I met with five different agents who showed no interest in me or my book. It was really frustrating because it seemed like they didn’t even give me the chance to let me tell them anything about the manuscript. So I got out of line and regrouped, deciding that I was going to approach the next agent differently. I got back in another line and waited for the 15 people in front of me to pitch their books to the agent. After about 75 minutes it was finally my turn. As I walked up to the table where the agent was sitting I said, “Hello, my name is Leo J. Maloney and I wrote a novel based on my career as a deep-cover black operative.” The agent immediately smiled and said “Tell me more.” After talking with me for about 15 minutes she asked me to submit my manuscript to her office. I was truly excited and I sent it to her as soon as I returned home. She and I then communicated via email and telephone on numerous occasions for several months after which she just dropped off the face of the earth never returning phone calls or email messages. This went on for about 6 months. Finally, I decided to self-publish Termination Orders and see what would happen.

One of my several cover stories during my career was owning a promotions company called Promotions International. This gave me an edge on knowing how to promote the book. My first step was to find a ghost writer to review the manuscript to be sure it was marketable. I researched several colleges and made contact with a recent graduate of Yale University who majored in writing and had been editor of the school newspaper. We set up a meeting to discuss the possibility of working together and it was a unique experience. He was about 22 years old, from Brazil and both his parents were medical doctors. He was very shy and seemed to have lived a sheltered and privileged life. During my interview with him I thought he was going to get sick when he heard some of my stories, but after a while he felt more comfortable and we agreed to meet again. At our second meeting we both felt more at ease with one another and we agreed on terms to work together to get this book published.

My next step was to surround myself with experienced people from the publishing world: someone knowledgeable with the printing process and services, someone who had worked with web marketing, and a graphic artist to design the cover of the book. 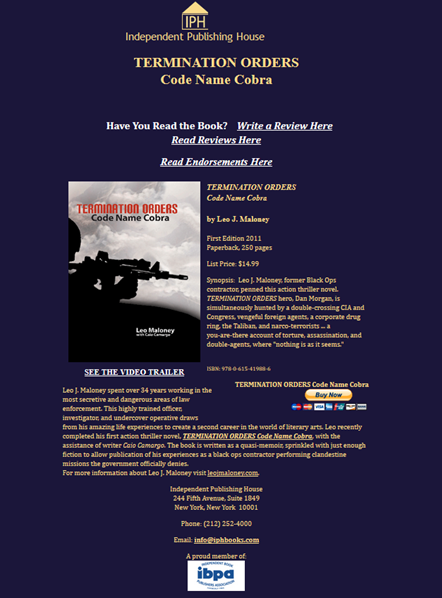 I then created a company called Independent Publishing House, IPH, complete with a professional website (www.iphbooks.com – No Longer in Service), a NYC address and phone number. The phone connected to an answering machine with my wife’s voice greeting using an English accent: “You have reached the corporate office of Independent Publishing House. We are either on the phone with another client or out of the office. Please leave your name, number, and a short message and we will return your call shortly.” We checked the messages from our home in Massachusetts. Bingo – the company was born.

I used a printing company in Canada to print 2000 copies of the book. Once the book was printed and ready for release I went to local Walgreen’s stores and asked the manager if he would consider taking my books on consignment. He said he would like to read it and would get back to me.  A few days later I got a call from the Manager and he told me he had some good news: not only would he take books on consignment but he talked to their corporate office and they agreed to place it in 50 Walgreen’s stores across the country.

I was also able to get several independent bookstores in both MA to agree to take book on consignment.  Then, what might be considered a miracle by aspiring authors happened. The Editor in Chief of Kensington Publishing Corp. in New York, NY, Michaela Hamilton read my book while on vacation on Cape Cod. She liked the book and contacted me on August 11, 2011 at 11:00AM. We had a conversation via telephone and she invited me to their corporate office in New York to discuss a book deal. Within a couple of days my wife Linda and I took the train to the Big Apple where we met with Michaela for breakfast. There was an immediate connection with Michaela and I and I knew this was my dream come true. Michaela introduced me to the owner of Kensington, the publisher and just about everyone else who worked there. The one thing that sticks out in my mind is when Michaela introduced me to the receptionist upon getting off the elevator and said, “This is Leo J. Maloney our newest bright star.”  It was an amazing experience. We then went to her office and I was offered my first two book deal. Although all my life I never lacked confidence, I couldn’t believe this was happening to me.

Since then I have five book published in the Dan Morgan thriller series with the sixth being released on November 22, 2016 For Duty and Honor, and the seventh being released in September of 2017, Rogue Commander. I am currently working on the eighth book tentatively being called Dark Territory.

I have also just extended my contract for an additional two novellas and two full novels.

I am very happy for the opportunity to share this story with all of you. I hope it will inspire you to know you can obtain your dreams if you work hard and are persistent.

Watch for my next blog post as I will discuss my books, characters, and storylines. There will be a new blog post every other week. If you have questions, or ideas on what you would like me to blog about, send me an e mail at leo@leojmaloney.com.

Finally, to ensure you do not miss any of my future blog updates, please join my email list by entering your email address in the space below.

Until next time “Be Safe, and Follow Your Dreams.”