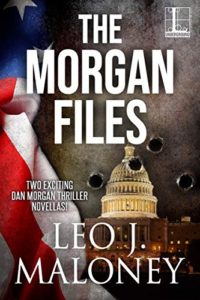 When the world is pushed to the brink of disaster, there’s only one man to call.  Dan Morgan has been trained for any contingency and is prepared to risk everything—an American hero unlike any other. Now you can read two heart-pounding Dan Morgan novellas in one electrifying volume.

Exploding bombs, Islamic terrorists, and catastrophic battles have ruptured all sectors of New York City. They’re part of an insidious plot targeting a visiting head of state. Dan Morgan knows what he has to do to prevent an irreversible domino effect designed to bring the world to its knees. There’s just one catch. Morgan’s teenage daughter is trapped among the hostages …

FOR DUTY AND HONOR

Captured by the Russians. Imprisoned in the Gulag. Tortured by his most sadistic enemy. But Dan Morgan knows that every prisoner has a past—and every rival can be used. That’s when the stakes go sky-high. Dan Morgan’s got to keep fighting. For duty. And honor. And even certain death …

Praise for Leo J. Maloney and His Novels

“Leo Maloney has a real winner . . . Gritty and intense, it draws you immediately into the action and doesn’t let go.”—Marc Cameron on For Duty and Honor

“Dan Morgan is one of the best heroes to come along in ages.”—Jeffery Deaver

“Maloney is the new master of the modern spy game.”—Mark Sullivan